Hundreds of writers turned out for the 17th Annual Surrey International Writers’ Conference this past weekend to listen to and be taught by writers, editors, publishers and agents from around North America. The conference differs from many other festivals happening at this time of year in that it is geared to educating writers rather than presenting the latest work from authors. Participants could take in a series of short workshops throughout the day as well as sign up to pitch their work to an agent or publisher or have a sample of their work edited by an editor or writer.They could also enjoy a silent auction, trade show, book fair as well as  a production of War Of The Worlds with the parts voiced by well known writers at the conference. 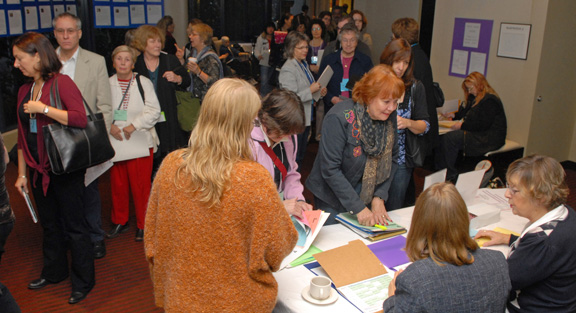 Participants sign up to pitch work or work with an editor. 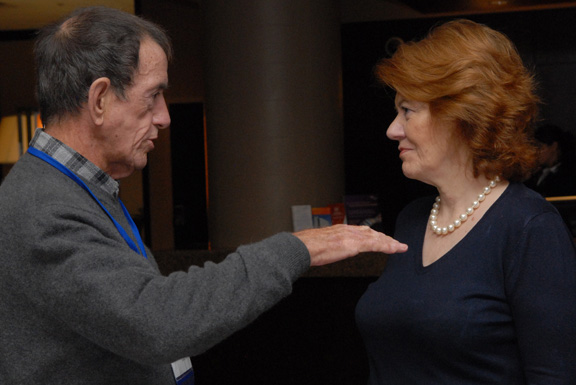 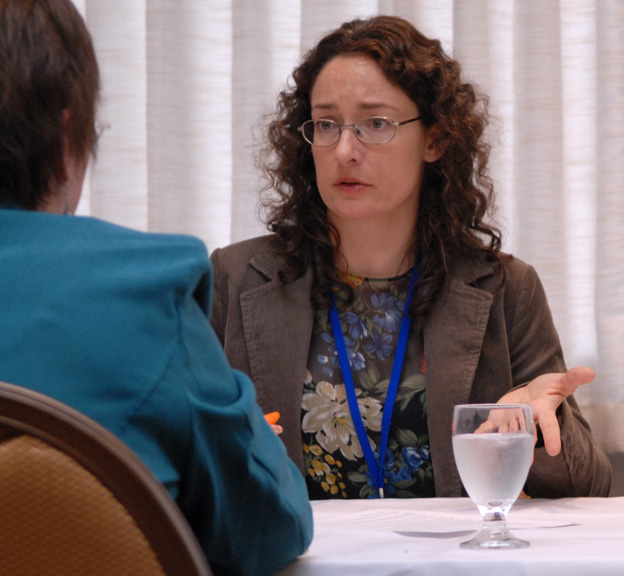 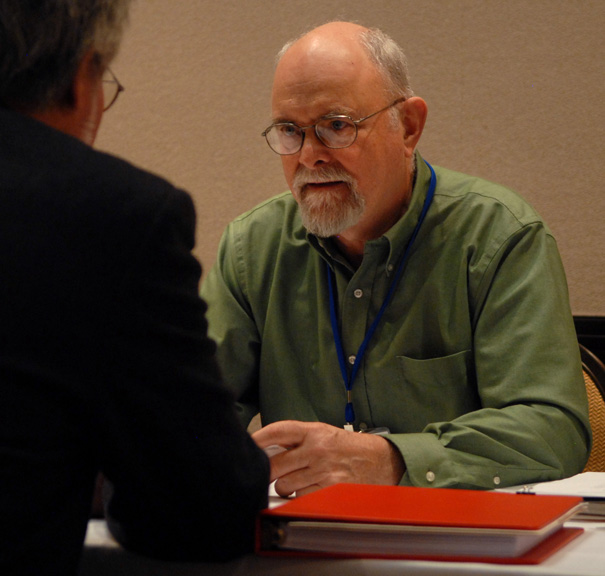 Publisher Howard White, from Harbour Publishing, listens to a proposal from a participant. 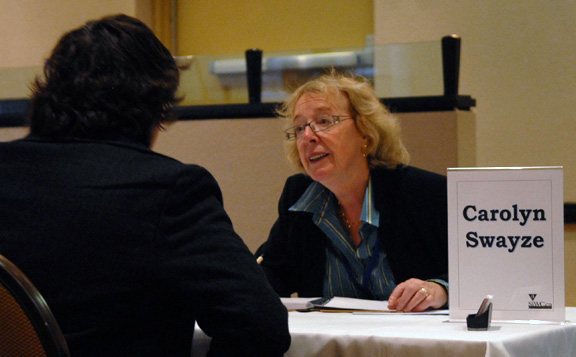 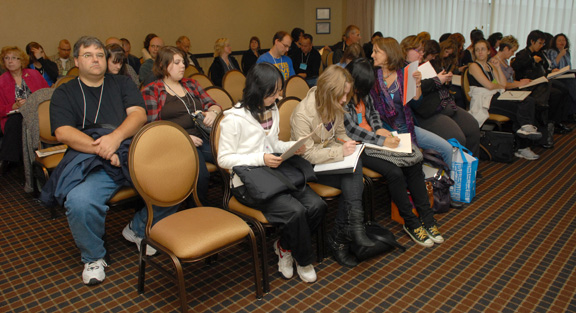 Participants wait for a workshop to begin 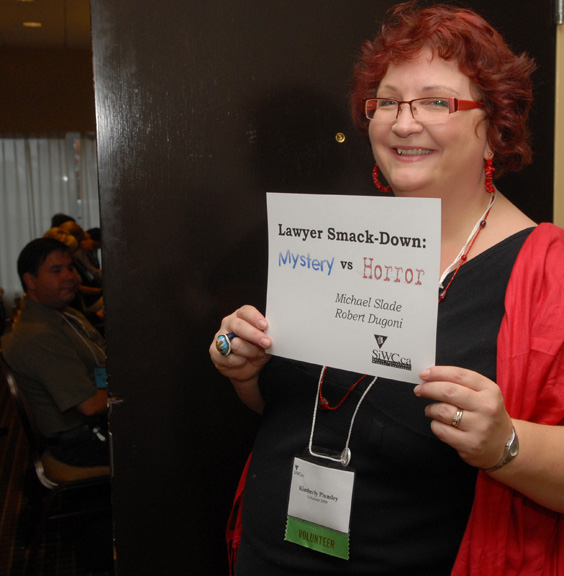 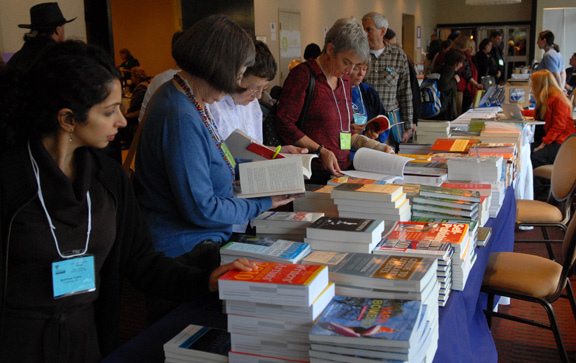 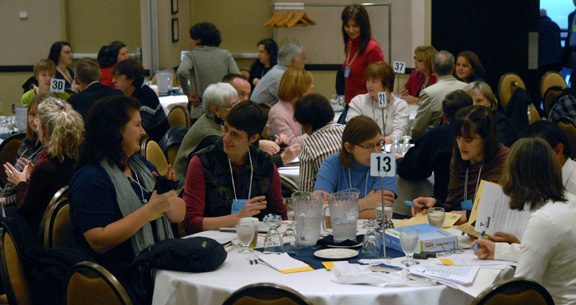 Waiting for the official opening of the Conference Saturday morning 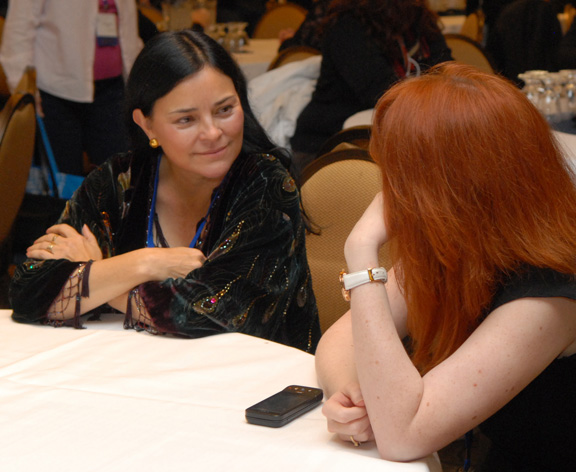 LP: You’ve just started a Writer in Residence gig at the Saskatoon Public Library. How long will you be there?

JOB: The position last nine months from the beginning of September 2008 to the end of May 2009.

LP: Why did you decide to go to Saskatoon?

JOB: I grew up on the prairies, in Calgary, but except for short visits to see members of my family, I have not spent any substantial time here since 1978. I saw coming to Saskatoon as an opportunity to reacquaint myself with prairie life—and, yes, prairie winters—and to live somewhere new. Though I have visited the city several times, I have not been in it since 1990. Also, there is a small ancestral connection, in that my maternal great-grandfather was part of the Northwest Field Force that came west from Ontario to suppress 1885 Rebellion—what they call the “resistance” here—at Batoche, an hour north. I did not realize it at the time I applied, but I think, subconsciously, I wanted to steep myself in my plains origins.

LP: How much time will be devoted to working with local writers?

JOB: Forty percent of my time—or two days per week—will be given to office hours at the library and the rest is for my own writing projects.

LP: As a student you studied with poets Garry Geddes, Robin Skeleton, and others. Is there anything you learned about working or teaching from your teachers that you’ll try to pass along?

JOB: One of the most important lessons any writer learn is how to write for the reader rather than for one’s self. Realizing how someone else reads and comprehends your work enables you to write in anticipation in order to have them more perfectly grasp your intentions. I learned this most fully in Robin Skelton’s classes and especially from my fellow students. Also, too many writers begin by believing that they have messages to impart. I feel that we are engaged in creating aesthetic experiences, where what is conveyed is visceral as well as cognitive, as sensory, emotive, and pleasurable.

LP: What will you be working on personally?

JOB: I have three major projects preoccupying me at present. The first is a book of poems constructed using traditional verse forms. In the same way that poets embraced vers libre a century ago, I want to see how set forms can open up and transform my voice. The second is a complex book-length project about three figures of the New York art world of the mid-twentieth century: Paul Cadmus (a painter), George Platt Lynes (a photographer), and Lincoln Kirstein (impresario and cofounder of the New York City Ballet). All three men were gay and knew each other as part of a loosely knit, emergent “queer” community; my interest is in how their different aesthetic concerns came to conceive of the (male) body. Third, I am also at a watershed moment as a poet in that the copyright of most of my earlier books has been returned to me. I can now more actively pursue putting together a new and selected poems as a retrospective glance back at nearly thirty years of work.

LP: Are there particular writers in Saskatoon that you’re looking forward to meeting or hanging out with?

JOB: The community is very large and I am looking forward to meeting many of the poets there, including Elizabeth Philips, whom I know slightly, and Sylvia LeGris, the new editor of Grain, Saskatchewan’s answer to The Malahat Review.

LP: You’ve been the editor of The Malahat Review now for almost five years. Will you be editing the magazine from Saskatoon or have you given up those duties?

JOB: I am taking a partial leave of absence, in that I will not be involved in the day-to-day editing and management of the magazine. When I left Victoria at the end of August, the fall and winter issues were almost fully in place. However, during the spring of 2009, I will be completing the annual funding applications of various provincial and national arts agencies—or, as Yann Martel said to me recently, the most unpleasant part of the job. I decided to complete them during my leave because I’m the one will have to live with the results of these applications upon my return to Victoria in June 2009. Also, I’m the one on staff most conversant with the application process, having completed such applications every year since 1989.

LP: What’s the best thing about being editor of the Review?

JOB: Before I became editor, I coedited Arc, a poetry journal in Ottawa. The Malahat allows me to work with fiction and creative nonfiction as well, which has expanded my scope. Also, because of the magazine’s reputation, the caliber of the writing I am able to publish is much finer. It’s long been Canada’s iconic literary magazine, and it shows in the writing we receive.

LP: What is coming up in future issues of the Review that we should be looking for?

JOB: In December, we are publishing a theme issue called The Green Imagination, which examines how writers engage aesthetically with environmental issues. It’s a longer issue than normal, 160 rather than 112 pages and shows Canadian writers to be very troubled about the long-term prognosis for the planet. It was originally conceived of as a sesquicentennial tribute to B.C., but is rather more cautionary than celebratory. Apart from this, there is no other theme issues planned. They are important to do on occasion, but I don’t believe that writers benefit from having too many of them on the horizon. General issues offer writers much more scope to publish a wider spectrum of work and are much more emphatically “participatory democracies.” There is nothing more alienating for writers than to be faced with endless back-to-back theme issues on topics that may not be relevant to them. The Malahat’s quartet of general issues in 2009 will nevertheless feature our usual annual contests: Long Poem, Far Horizons, and Creative Non-Fiction. Our preoccupation will remain one of excellence.

LP: You were Poetry Editor at Signature Editions until last spring. Are you continuing with any book editing duties on a freelance basis?

JOB: While I am in Saskatoon, I will not be taking on any freelance projects, but once I am back in Victoria, I will definitely accept any that might come my way. I enjoy this kind of work enormously and believe that I have a talent for it. It’s time-consuming work; on average it takes me about twelve to fifteen hours to work through a poetry manuscript. I charge $60 per hour, which might seem steep, but it is a competitive rate.

LP: As an editor you’re aware of what’s new on the publishing front. What books are you looking forward to seeing?

JOB: I see so much new writing that sometimes I get overwhelmed by it, but new books that I am looking forward to reading are by Ottawa poet, Craig Poile, one of Canada’s technically proficient writers. He’s got a new book coming out with Goose Lane next year. Also, Saskatoon’s Barbara Klar has a new book of poems with Brick called Cypress.

LP: You grew up in Alberta, lived and worked in Ottawa, have been in Victoria for several years and will be living in Saskatchewan for the next year. Any thoughts on how the cities are different for a writer?

JOB: What I liked most about Ottawa when I first moved there in 1986 is that its writing scene seemed entirely free of hierarchy. It was refreshing. Saskatoon reminds me of Ottawa in this regard; it’s the friendliest place that I have ever lived, and the writing community reflects this. Thistledown Press, which is located down the street from where I am living, recently launched four first books of poetry, with an audience of over 150. I cannot think of anywhere else where such a turn-out would occur, especially for first-time writers. A transplanted Vancouver poet whom I have just met told me that she’s had had a better chance to find an audience for her work in Saskatoon than she did in B.C., where she was one among so many writers and where the arts are too compromised by the politics of reputation-building. My experience of being in Victoria has been so coloured by my position as editor of The Malahat Review that I probably don’t have a terribly accurate view of what it is to be a writer there. Certainly, I felt welcomed when I arrived and realize I am in an enviable position—though I have lost count of how many writers across the country have introduced themselves by telling me that the magazine has rejected their work. Maybe a rejection by the Malahat is a mark of distinction or at least a rite of passage.

LP: Last question. That old standby. What are you reading now?

JOB: So much of what I read it is determined by the dictates of my Cadmus-Lynes-Kirstein project. Right now I am reading a short biography of George Balanchine, the founding artistic director of the New York City Ballet; a book of essays of Lincoln Kirstein; and George Chauncey’s Gay New York: Gender, Urban Culture, and the Making of the Gay Male World, 1890–1940. I have just finished Lorna Crozier’s The Bones in Their Wings, her lovely book of ghazals, with an explication of the rules of this form, and the Collected Poems of Wilfred Owen. Yesterday, I just started Anne Marie MacDonald’s Fall on Your Knees.