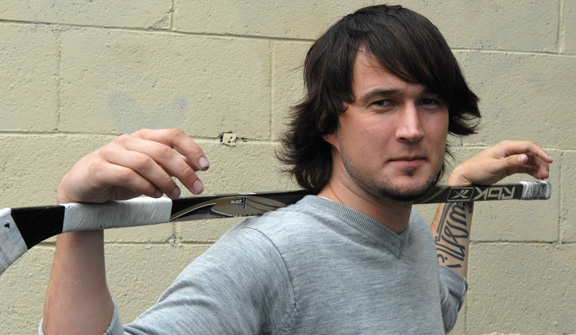 LP: Monument’s characters are heavy drinking, drug abusing, amoral, racist, violent, misogynist young men yet somehow the reader remains interested rather than simply repelled by the characters. Was this a challenge when writing the book?

PB: Definitely, I wanted people to be torn about cheering for Seth in particular. I wanted him to be an antihero, as my buddies and I always say, ‘a lovable asshole’. These guys are young, confused, stupid, immature, just like I was, and am still am a bit, it’s part of being young. But I think there’s hope for these guys, even though they seem like lost causes. They really didn’t go looking for trouble, like Seth, they just had the cards stacked against them from Day 1, and so life has made them frustrated and rebellious, and this is how they lash out back against that, by being assholes.

However I’m sure many people will read it and just straight up hate these guys and burn the book and curse me as a writer. To each his own I guess, I just hope people see past all the shocking elements and realize these guys are far from perfect, they’re human.

LP: The book ends somewhat ambiguously with the main character’s secret possibly to be revealed to another. Did you want readers to be left wondering or do you think they’ll write their own ending?

PB: I hope they write their own, but they don’t hate me for leaving it open. I think the book ends at one of the elbows in Seth’s life, and now he’s got another chance to make a choice, another chance at redemption. What happens after the final pages, I think, the reader must decide – me personally, I have my own future for him, but that’s the beauty of it, everyone will have a separate future for him, be it good or bad.

I like books that make you think past the final pages, and that also tie things together a bit in the end. I can’t stand a lot of books for that reason, they just kind of end, and you’re like ‘OK what was all that for? You did a great job at describing the characters and the setting, and then I get this for an ending.’ I always feel cheated so I wanted to avoid that.

LP: Hockey plays a big part in the book. The one commitment Seth lives up to is showing up for games, no matter what. Why that commitment to a game?

PB: Honestly hockey is one of the main reasons I’m still around today. I’ve been through some rough patches in my life, and you can always go out for a few hours a night and totally forget about all your problems on the ice, it’s total escapism. Seth is good at hockey, it’s really the only thing he’s good at, so he just naturally gravitates towards that as a bit of a bouy in turbulent waters. It’s the one place – the rink – where’s he’s in charge, where’s he good at something and feels respected.

LP: How much did you rely on personal past experiences in the book?

PB: Too much. Way too much. Pretty much every character including the main character is based directly on people I know personally. I don’t know if I will ever write a book this personal again, I didn’t expect a lot of the reactions I got from people, both positive and negative albeit. Every story, everything that happens throughout the book is taken directly from personal experience, or from a friend’s personal experience.

LP: This is your first novel. How long did it take to write it?

PB: Just over a year for the bulk of it, the majority of it was written during 10 months of sobriety, I decided to quite drinking for a year, although I only lasted 10 months, and I realized I couldn’t go out to the bar and hang out with my friends, it was impossible. So I was home alone a lot of nights and just kept writing, collecting stories along the same vein and then I just checked the word count one night and though ‘man I’ve got enough for a book here if I keep going’. So I kept going.

LP: The book’s main characters are all young. Do any of your friends who have read the book identify with any of them?

PB: All the guys in the book are based directly on friends of mine and guys I know. Some of them are simply composites, Cancer being a blend of my buddy Ryan mentally and another friend physically, and Caleb a blend of two other buddies. Some of the more minor hockey guys are basically real guys I know, with the names changed in most occurrences.

But yeah a few of my close friends have read it and they got it, they totally understood some of the themes I was trying to get across. For me that was the biggest compliment.

LP: The book is divided into chapters/books with individual titles. Why did you do this, what is the significance of the titles?

PB: It’s mostly to break it up, kind of like breathers for the reader. But each one was carefully picked, such as the car accident chapter, ‘Mercaptan’ is the additive they put in gasoline that gives it that distinct smell that Seth is comforted by right after the accident. Some are much more cryptic, not sure people will totally understand all of them, they’re also there to set a tone too for the forthcoming chapter.

LP: I found it interesting that you used brand names for many things rather than generic terms (ie instead of just noodles you use the full brand name, or a very specific brand of cigar rather than just a cigar). Why?

PB: I was drawing a lot from my own life, I have a penchant for Blackstone Cherry cigars, and so just to say ‘tipped cigar’ doesn’t really give the reader that definitive look. A lot of the references give the reader a bit of a sense of time, like the video game Cancer is obsessed with, GoldenEye, it lets the reader know we’re in the days of Nintendo 64, which I thought was a bit cooler than saying pre 9/11 or 1999-2000. It’s also not bowing down to corporate advertisements, but I hope I don’t get sued. Mind you that might be fun for me, not my publisher.

LP: This is a very much a BC book with events taking part in Vancouver and Kamloops. Is location important or could this book been set elsewhere?

PB: It’s definitely a B.C. book because that’s all I really know. I’m not good enough of writer to have set it in Manitoba or Detroit or just made up all the settings. Honestly when I first starting writing this I had no intention of publication, so for me it was just natural to blatantly place the characters in places like Kamloops and Vancouver because I was really just kind of reciting stories verbatim.

LP: The only books that any character in the novel go near are philosophy books that the main character studies, for school and in a bookstore. Do you think your novel would appeal to the type of characters who populate the novel?

PB: I hope so, other than myself, I really wrote it as a book my buddies might want to pick up and get something from, draw some parallels from. But yeah I honestly don’t care what critics or other writers say about it, I’m sure they’ll take their shots because it’s not a literary novel, the language is simple and it’s not a huge existential, flowery look into Canadiana, and I didn’t want it to be that at all. I just wanted it to be a good story. But my buddies, or regular guys who have lived this life, if they can pick it up and go ‘yeah, that’s all bang-on’ then that’s all I’m worried about.

LP: You work full time as a journalist. How does that writing affect your fiction writing?

PB: Too much maybe. It’s made me a simpler, more straightforward writer, but it also hampers creativity at times. I don’t think I could do both types of writing for a long time, I’d like to do the journalism on the side, rather than the fiction writing on the side, but fiction writing doesn’t pay the bills, so I can’t really do that. Mind you journalism doesn’t really pay the bills that well either, maybe I should just go into PR and call it a day.

LP: The book has been published by a very small press Now Or Never Publishing who gave you quite a bit of control/input over the book design. Did you enjoy that process or was it a distraction?

PB: I’d like to say it was enjoyable but it was a bit of a distraction too. I think in an ideal world a writer just wants to write, and leave the rest to everyone else. But I learned a lot about the business and am still learning. I learned the fiction game is a terrible bitch, excuse my language.

I got a lot of rejection letters before NON took the book, that’s one of the reasons I’m hesitant to write again, I don’t have enough confidence in my writing to go through that lovely rejection process and self-promotional aspect of it, it’s very draining when you’re a young writer without a lot of backing. You get told ‘no’ a million different ways, I’m still recovering from that.

LP: What’s next? Do you have another novel underway?

PB: No, no novel in me for awhile, this one was draining, and unless I stop drinking again I don’t think I’ll get that amount of time again. I have more than a few ideas for a book, but that’s way down the road in the future when I’m in the right head-space.

I have however finished a book of poetry and a movie script, but I’m hesitant to shop them around, I’ve had my fill of rejection for awhile. But I’m hoping maybe the book might open one or two doors down that road, but you never know. I’m playing it all by ear for now.