Cat George finished her last shift as a journalist on Friday March 13 and tomorrow, Monday March 15,  she starts work on her first novel.

LP:  You’re writing a first book and at the same time a blog about that experience. Doesn’t that put a lot of pressure on you as a writer?

CG: Yes, I suppose – but I think that’s a good thing. If I’m just at home writing in a vacuum, I think there might be – for me at least – the feeling
that I can let myself off the hook, not work for a few days if I’m feeling a little blocked, just do other things. By inviting people to follow along
with me, keeping them up to date, I’ll know that someone’s keeping an eye on my progress and my work. Kind of like appointing the Internet readership as
my boss; I’m accountable to them.

LP:  What can you tell us about the book, is it a novel, non – fiction, what is it about? Have you done any actual writing work on it already?

CG: It’s a novel; the idea comes from a short story I did a few years ago, during my BFA in Creative Writing at UBC. I’d been tinkering with reworking the story for a while and then suddenly realized it just couldn’t work as a short story because there was too much there. I’ve got a big outline, about15 pages, and a few pages worth of scenes written out. I’ve been jumping to get going for a bit now but decided I would hold off and commit to actually start writing on March 16, to treat it as if I was starting a new job. It’s about an older woman – she’s 75 – who’s volunteering in a museum that ends up featuring an exhibit that’s right out of her own childhood. She realizes that what the museum is presenting as history doesn’t mesh with what she remembers as happening, and from there it deals with her trying to determine how the past has shifted on her. That part of the book takes place in 1985.
The other part of the book, her memories of her teenage years, take place in the 1920s.

LP: What happens if it takes more than your self imposed deadline of  a year to finish?

CG: Well, at this point I’m still optimistic, so I might have to come back to that question eight months from now with a better sense of whether that’s
how things will go. I like deadlines, I work better with them, so I knew I’d need to set one and a year was a nice, round choice. If it turns out that on
March 16, 2010, I haven’t finished a complete book, but that I’m well on the way to the finish, I’m not going to be too upset; I’ll just have to find some more
time and complete it, I guess. Financially it would be better if I was done within a year.

LP: Why a book, why now? You’re leaving a full time reporter job to do this. Isn’t that huge risk?

CG: Certainly I’ve heard that from other people; but, actually, I think that this was the time when it had to be done. I don’t have any kids, I don’t
have a mortgage, I’m pretty much finished with my student-loan debt from my school days; I’m not risking anybody else’s future or major financial havoc
by choosing to do this. I’ve been saying I’d write a book since I was 15 and the one element I’ve always felt holding me back is that I just didn’t have
the time. So I made the decision about a year ago that I would make the time, and that I would do that by setting aside money and then giving myself
a year for the project. I didn’t want to look back two decades from now and think, I could have written a novel then but I wasn’t willing to take the
risk. I want to look back two decades from now and think, good job on that first novel.

LP: You have a new book coming out any day now called Race to the Polar Sea: The Heroic Adventures and Romantic Obsessions of Elisha Kent Kane. What can you tell us about this book?

KM: Race to the Polar Sea tells the story of Elisha Kent Kane, a nineteenth-century explorer who sailed north in search of an Open Polar Sea, hoping to rescue survivors from the lost expedition of Sir John Franklin. After surviving two horrific winters in the Arctic, discovering the so-called American Route to the North Pole, and forging a unique alliance with the Inuit, Kane led his men in the most dramatic escape in northern exploration history, man-hauling sledges and sailing hundreds of kilometres in small open boats. Kane was the most literate and artistic of all northern explorers, and he left a vivid portrait of the Arctic that speaks to the contemporary debate about global warming. Once celebrated, Kane has been largely forgotten. In my book, I trace this to his relationship with Maggie Fox – a “spirit rapper” from Ontario whose tragic death has been wrongly blamed on Kane. Race to the Polar Sea also draws on a long-lost journal I found in the possession of a Calgary antiquarian. There’s more at www.kenmcgoogan.com.

LP: This will be your fourth book dealing with early Arctic exploration. These books have been extremely popular. What’s next, do you have plans for more books looking at the same eras? Do you have any plans for a contemporary Arctic book?

KM: Race to the Polar Sea is the fourth and final stand-alone volume in what I consider an Arctic Discovery Quartet. These works augment and resonate with each other, and can be read in any order. I see the four as speaking to contemporary concerns, and for the moment, at least, they represent all I have to say about the Arctic.

LP: What aspect of the Arctic region appeals to you personally?

KM: I seem to be obsessed with exploration history: so many dangerous voyages and disastrous expeditions, so many complex and revealing encounters with native peoples, so many heroic figures and damn-fool idiots, so much hubris, so much cheating and lying, so many mistakes, so many tragic deaths. Arctic exploration is Canada’s answer to the American Civil War: we can’t get enough of it. Certainly, I can’t.

LP: With the Arctic seeming to suddenly emerge as an important environmental and news story do you find yourself in demand now as an Arctic expert?

KM: I have experienced an increase in requests, yes. Some people say I’ve never seen a microphone I don’t love.

LP: You’ve been visiting the Arctic on a fairly regular basis over the past decade, what changes are you noticing?

KM: Because I have spent ten years immersed in the history of Arctic exploration, I carry in my head a vivid picture of the Arctic of the eighteenth and nineteenth centuries. As a result, when I look around today, I see the changes that have happened since then – both among the Inuit, but also in the landscape. Last year, while sailing in the Northwest Passage, where once Elisha Kane struggled through upraised tables of ice fourteen feet thick, I looked out and saw nothing but open water. That contrast shocked me. Obviously, it speaks to global warming.

LP: What do you see transpiring in the Arctic over the next couple of decades?

LP: Other books you have written have used Jack Kerouac and the Beats as a subject, any plans to return to that theme?

KM: Jack Kerouac was the first explorer I went chasing. Not long ago, I published a final revision of my first novel, called Visions of Kerouac: Satori Magic Edition. It’s available online and at www.WillowAvenueBooks.com. I had fun with it, and like to think it stands up. 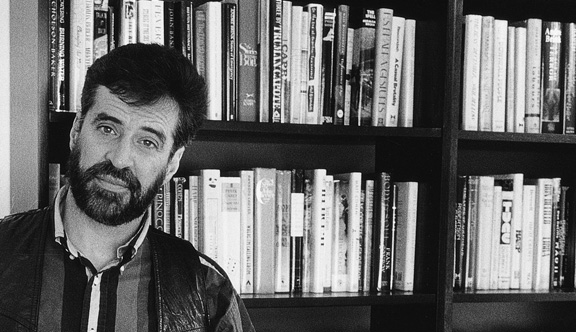 LP: You spent many years as a working journalist and books editor. Do you miss that world at all?

KM: These days, while I put most of my energy into books, I do write some journalism – articles for The Beaver and The Globe and Mail, a books column for Active magazine. Of course, that’s different from daily newspapering. I don’t miss the stress or the office politics, but for sure I interacting with so many interesting people. Also the soapbox and the regular pay cheque – they were big positives.

LP: You grew up in Quebec, spent many years in Calgary and now live in Toronto. As a writer what are the differences?

KM: For someone who writes in English, no matter how well you speak French, living in Montreal means dealing with the French-English dichotomy, one way or another. You can’t get away from it. A writer in Calgary is up against it locally. Slowly but surely, neo-conservatives have decimated a once-thriving book publishing industry. Toronto still has a viable book-trade infrastructure. The barbarians are at the gates, but writers at all levels can still find places to publish.

LP: What are you reading now?

KM: We recently returned from five weeks in Scotland, my wife and I, and I’m reading a whack of books about Scots in Canada.