LP: You’ve got a new book out, a travel book, Beyond Belfast, published by Penguin. What’s it about?

WF: It’s about a two-month, 560 mile hike I did along the Ulster Way “the longest waymarked trail in the British Isles.” It was bogs, banshees and blood sausage. With sheer-drop coastlines, crumbling castles and many’s a pub.

WF: I was raised by the daughter of a Belfast orphan, and Northern Ireland has always been there, lurking in the background — not the least of which is due to family rumours of a lost inheritance and a possible castle of my own. My grandfather’s past is murky at the best of times, and a mystery lurks at the heart of the story.

LP: One of your first books was Hitching Rides with Buddha, where you hitchiked across Japan. As a slightly older person than you were then, were there any differences or challenges in the physical act of traveling?

WF: I’m certainly more creaky and less patient when it comes to bad meals and questionable sleeping arrangements. I camped on the trail several times in Northern Ireland, and I when I woke I always felt like I’d just come from the wrong end of a pummeling.
LP: What’s next? Are you working on another novel?

WF: The next book is a Christmas memoir with an illustrator. It’s a gift book about my own childhood in northern Alberta titled Coal Dust Kisses.

LP: Will we ever see another Canadian political/historical  book from you?

WF: It may be a while. I really feel I’ve said my piece — and anyway, my Canadiana usual springs out of anger and outrage, and lately I haven’t been angry enough to launch into another extended harangue. Irked, yes. Annoyed, certainly, But not really angry.

LP:  You’ll be on the road promoting this new book, do you bring reading material and if so, what for this trip? 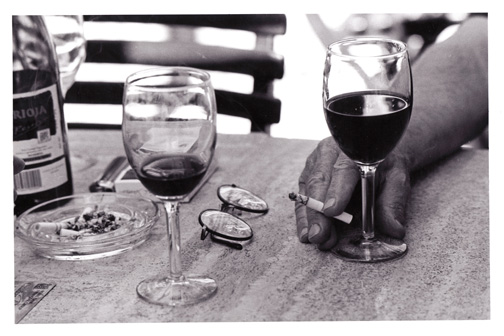 Sometimes you don’t need a face for a portrait.

I had photographed the late Timothy Findley for my first book First Chapter and following that photo session he sat down for an interview and lunch with then Calgary Herald books editor, now best selling author in his own right, Ken McGoogan. I joined the pair and Findley’s partner Bill Whitehead and continued to take a few photos but mainly listened in. What I was treated to was an entertaining hour and a half as Findley and Whitehead, the practiced tag team that they were, traded stories, memories, observations while eating, smoking and drinking wine. i think Ken just hung on and tried to get it all down.  It was an incredibly enjoyable lunch and I think this image showing Findley’s hand, glasses and wine remind me more of that encounter than the other, more traditional,  portraits I took that day.

Photographer Cara Barer turns old books into sculpture and then photographs them. Images here on the Telegraph website. More images at www.carabarer.com 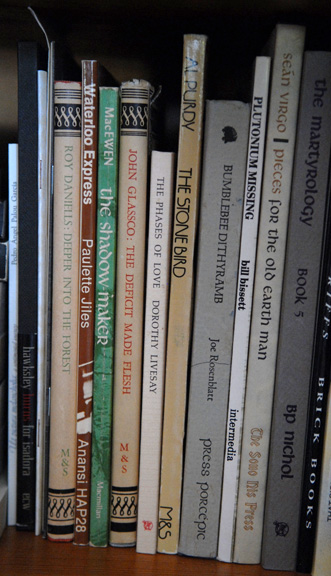 This photo originally ran as part of a photo feature in the Victoria News.  Russell Books is well known in Victoria, BC, both for the service and the selection. The 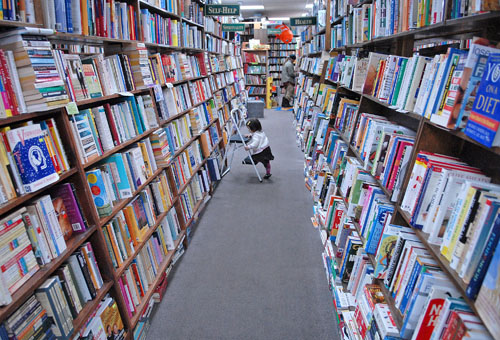 store is the largest used and remaindered book shop in Canada. Aliyah, the young daughter of managers Andrea and Jordan Minter spends lots of time in the store with her parents. On this day she spotted the stool and made a beeline for it. Her mother removed her before she actually climbed up on the steps.